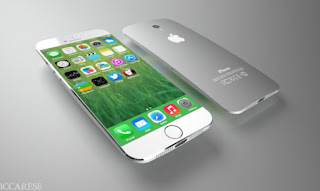 Today it was reported that a small start-up company Energous reached an agreement with Apple on the application of its WattUp technology in future iPhone models. Reportedly, the “Apple” giant will have exclusive rights to the possibility of allowing the smartphone to charge through the air at a distance of 4.5 meters from the charger. Special chip Energous, and which allows for a wireless charging, is so small in size, it should have no impact on the size and appearance.

Chip operates with a special transmitter which can be placed anywhere in the room. By setting such a transmitter in an office or bedroom, users no longer have to worry, that he forgot to put the smartphone to charge, the iPhone will continue to charge automatically. Energous aims to launch its technology in 2016 or 2017. This means that the iPhone 7 and iPhone 7S should receive support wireless charging.
It is worth noting that Energous and Apple has not officially announced a partnership, so now this information – no more than just a rumor.

The assumption that the implementation of wireless charging of the iPhone appeared in the beginning of last year, when it became known that Energous signed an agreement with an unnamed company, which is described as one of the top five consumer electronics manufacturers in the world. Among the candidates identified Apple, Samsung, HP, Microsoft, and Hitachi. However, HP and Hitachi did not produce smart phones, the Samsung makes its own processors, and Microsoft position in the smartphone market so ambiguous that the only likely candidate left Apple. So says analyst Louis Besenes of Disruptive Tech Research.

Apple iOS 9.3.1 fixes an issue with reference to the iPhone and iPad