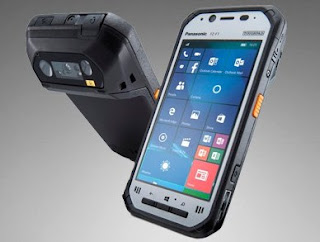 As part of the MWC 2016, Panasonic introduced the new compact tablet-oriented business customers. Novelty called Toughpad FZ-F1 has a display with a diagonal of just 4.7 inches, but it looks quite cumbersome. This is due to the fact that the gadget is equipped with a barcode scanner, and its body is additionally protected from moisture and dust. One of the features new items can also be considered that it is running on Windows 10 operating system.
Panasonic Toughpad FZ-F1 is equipped with a quad-core processor powered by Qualcomm, 2GB of RAM and a built-in storage capacity of 16 GB. According to the manufacturer, the full battery charge should last for 8 hours of battery life. However, if necessary autonomy Toughpad FZ-F1 can be doubled at the expense of an additional battery.
Other features of the device include a touch screen, which can interact both with gloves and without them, the presence of three microphones, the stability of the gadget to the high and low temperatures and the ability to withstand a fall from a height of about two meters and immersion in water to a depth of up to one meter.
The sale Toughpad FZ-F1 will arrive later this year and will cost about $ 1800.